Futures electricity prices for Cal 2023, 2024 and 2025 have continued rising significantly for all NEM states this month (most dramatically for NSW). There is significant variation in prices between the states: for 2023 futures NSW is currently at $128.35/MWh, followed by QLD with $102.80/MWh, SA at $76.89/MWh and VIC at $59.37/MWh. Continuing pressure is coming from high global coal, oil and gas prices exacerbated by the Russian invasion of Ukraine.

The BOM is predicting a very low chance of low temperature extremes for winter which should help to ease demand side pressure, however it is difficult to predict how long the geopolitical uncertainty will affect the Australian energy market.

Closer to home, the upcoming Federal election could provide impetus toward energy policy if a change in Government occurs. 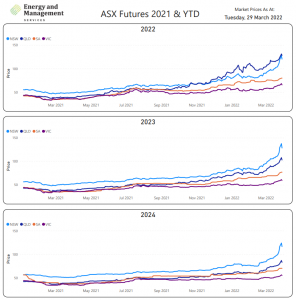