Futures prices have remained excessively high this month in NSW and QLD, from a combination of drivers including the continuing conflict in Ukraine and Russian sanctions, high commodity and gas prices, coal closures and unplanned outages. Despite this there was an easing of the rapid upward trend of the last few months, and prices ended the month relatively stable compared to the beginning of the month in NSW, QLD and SA. Prices in Victoria have continued rising, but still remain the lowest of all the states. Prices have been rising to historically high levels so some easing of the upwards trend was expected, however the continuing global energy crisis means there is no clear downward trend occurring at this stage.

This month has also seen a dramatic rise in spot prices in NSW and QLD, with prices sitting above $100/MWh and regularly reaching $300 or above (prices above this are considered volatile). There are a number of factors influencing the high prices including coal generator outages, high international coal and gas prices affecting domestic prices, and volatility caused by tight supply and demand balance and interconnector constraints.

The upcoming Federal election is likely to affect long term energy market pressures given the differing energy policy focus of the two major parties, but is unlikely to create any significant immediate response. Despite some reduced solar output due to the recent rainfall, renewably sourced electricity is performing well in the current market, and there is an obvious price gap between states with higher renewable generation (SA and VIC) and NSW and QLD which have a higher reliance on coal generation. 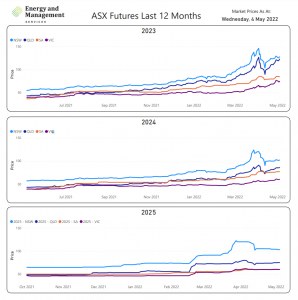 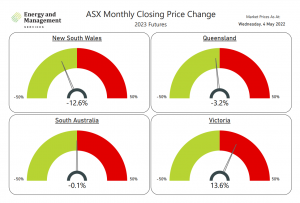