Australia is in the midst of an energy crisis, with the Australian Energy Market operator taking the unprecedented step this month of suspending the electricity spot market across the entire NEM for 9 days to ensure reliable supply was maintained. This came after all mainland states breached the cumulative price threshold, starting with Queensland on Monday 13th June, and Administered price caps of $300/MWh were imposed. While reduced generation from planned and unplanned outages squeezed the supply/demand balance, some generators were withdrawing capacity due to high operating costs and there was speculation that they were seeking to be directed to generate by AEMO so they could receive higher rates of compensation, potentially in breach of the National Electricity Rules. AEMO justified the market suspension decision saying “it has become impossible to operate the spot market in accordance with the provisions of the Rules” and believes the system will be easier to manage under the suspended market, where all generators are expected to make themselves available and the pricing regime is simplified.

The elevated prices we have seen in the market have been driven by record prices for coal and gas, exacerbated by the global conflict which has caused international buyers to turn away from Russia, a major supplier of global energy. With continuing coal supply constraints, resultant increased gas generation also aligned with significantly increased winter retail gas load for heating due to very persistent cold weather across the eastern seaboard of Australia. While a wetter than normal winter was predicted by the Bureau of Meteorology (BOM), the seemingly relentless cold was not anticipated and, combined with significant rain, resulted in a greater reduction of solar generation for much of the month.

The average gas price for June was almost $40/GJ, which was an increase from the already-historically-high prices of around $30/GJ in May.

In times of extreme market stress, AEMO can declare to temporarily suspend the spot market. In this situation, bidding and dispatch continues where possible, but AEMO issues dispatch instructions based on what they believe will be the most practical. Spot price is set based on a Market Suspension Pricing Schedule which is published weekly, 2 weeks in advance. The schedule is region specific and sets half-hour prices for business/non-business days based on a 28-day average for that specific region, day type, and time period (with 48 half hour periods in one day), with resultant prices then capped at $300/MWh. 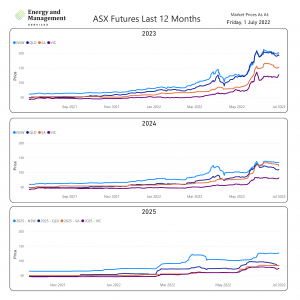 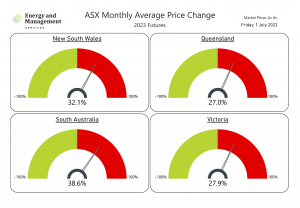 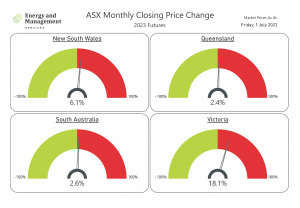