An Article From the Australian Financial Review

A $100 million battery to be built in south-west NSW will support a $3.2 billion contract won by Shell and Edify Energy to power schools, hospitals and state government buildings for the next 10 years – in stark contrast to Canberra’s focus on gas to supply power on demand.

The battery will have a maximum power output of 100 MW, and capacity of 200 MWh, meaning it can run for two hours at maximum output before having to be recharged. 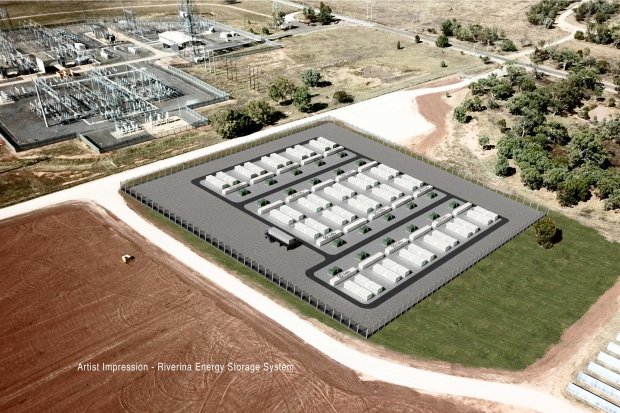 The plans for the Riverina Energy Storage System come just a week after the federal government committed to spend $600 million to build a new gas-fired power station in the Hunter Valley, the need for which Mr Kean and others have questioned.

Several other projects to provide electricity into the grid when it is needed are in the works in NSW, including a gas power plant that EnergyAustralia committed to build in the Shoalhaven region and other large battery projects that remain at the proposal stage.

Mr Kean said the NSW government, the second-biggest energy user in the state, is using its purchasing power to leverage new dispatchable capacity.

“This battery will help to keep the lights on and keep costs down during peak energy periods, and support more renewable energy to come online,” he said.

The lithium-ion battery is to be built and owned by Edify alongside the Darlington Point solar farm it owns with Octopus Investments, which is the largest solar farm connected into the National Electricity Market.

With a 200 megawatt-hour capacity, it is due to come online by early 2023, a few months after the power supply contract with the government starts in July 2022.

Edify said the system will complement the growth of renewable generation in the region. Shell Energy has signed a deal to access part of the battery, amounting to 60 MW and 120 MWh of its capacity.

Edify CEO John Cole said energy storage is fast becoming a “valued capacity solution” for the National Electricity Market, noting that uncertainties in storage technology are reducing, thereby breaking down barriers to acceptance in the market.

The Manly-based company’s solar and storage portfolio involves 50 MWh of storage at the Gannawarra solar farm in Victoria as well as more than 770 MW of solar generation.

The looming shutdown of Liddell in April 2023 prompted federal Energy Minister Angus Taylor to call for private investors to commit to build 1000 MW of dispatchable power capacity by the end of April. The missed target caused Prime Minister Scott Morrison to announce $600 million of funding for a Hunter region gas-fired power station, to be built by Snowy Hydro.

Snowy CEO Paul Broad says gas power generation is needed in addition to batteries to provide electricity during prolonged droughts in wind power and after the sun has set.

Mr Taylor will tell an energy conference in Melbourne on Tuesday that gas will inevitably provide part of the answer as coal plants close down, alongside pumped hydro, increased transmission and batteries.

“Ultimately we need balance between these technologies and between intermittency and dispatchability,” the minister will say.

Greg Joiner, chief executive of Shell Energy, which has been building up a low-carbon energy supply business in the eastern states, pointed to the long-term services agreement with Edify as a model for how large energy users can access dispatchable power such as storage to complement renewables.

Construction of the battery will create up to 35 local jobs.