An Article From The Australian Financial Review

Record solar panel installation and milder temperatures meant wholesale electricity prices were at zero or below more than 16 per cent of the time during the last three months of 2021, underlining the financial strain on Australia’s traditional coal power generators.

Adelaide, Melbourne and Sydney all experienced their coolest November in decades as a La Nina weather pattern resulted in Australia’s wettest November in 122 years.

As much of the country experienced cool weather, the Australian Energy Market Operator said there was a record amount of energy generated via rooftop solar on the National Electricity Market – and as a result, quarterly average demand for power from the grid fell to the lowest fourth-quarter level since 2005.

The soft demand meant wholesale electricity prices were at zero or below for more than 16 per cent of the time over the three months, said Violette Mouchaileh, AEMO’s general manager, reform delivery.

Low demand on the central grid can also require AEMO to direct plants such as gas-fired generators to come online to help keep the system stable.

“The changing generation mix saw zero or negative spot prices occurring during 16.6 per cent of all dispatch intervals during the quarter and a total of 11.2 per cent for 2021, more than doubling 2020’s average of 4.9 per cent.”

The figures illustrate Australia’s rapid transition to renewable energy sources, which, while accelerating emission reductions, has left coal power generators struggling to compete, causing some to announce the early closure of their plants. 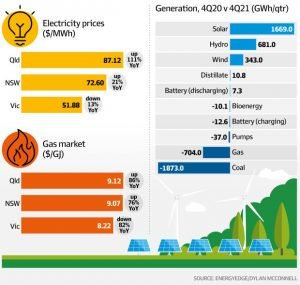 Such is the rate of closures, AEMO expects that coal-fired power generators will have exited the NEM substantially by 2030 and entirely by 2043, up to a decade faster in some cases than previously anticipated.

The issue has stoked concern within some quarters about the social and economic impact on coal mining communities, while others have questioned the stability of Australia’s energy grid during periods when it relies heavily on renewable sources that are intermittent in supply.

Prime Minister Scott Morrison has proposed significant investment into boosting gas production to help ease the transition, though critics have said that increasing different sources of renewables would be sufficient.

Others have pushed for coal plants to be extended, while the Australian Energy Regulator has asked AEMO to consider the possibility of coal generators producing more flexibly as it considers the outlook for the sector.

Coal is still the largest generator of electricity in the NEM, but its contribution has fallen significantly from its annual peak recorded in 2006.

In contrast, AEMO said the average renewable output levels rose more than 3 percentage points in the December quarter to 34.9 per cent, contributing to South Australia, Victoria and NSW all recording records for minimum demand from the central grid.

In contrast, AEMO said the average renewable output levels rose more than 3 percentage points in the December quarter to 34.9 per cent, contributing to South Australia, Victoria and NSW all recording records for minimum demand from the central grid.

AEMO said electricity prices averaged $57 a megawatt-hour during the final quarter of 2021, which was below the third-quarter average of $66/MWh but 31 per cent higher than a year earlier.

“While underlying spot prices fell or were stable in the southern NEM regions, the larger share of thermal generation in Queensland and NSW and higher prices being set by black coal and gas, as well as limitations on transfers of lower-cost energy from the southern regions, each contributed to an average $45/MWh north-south price differential,” Ms Mouchaileh said.

In Queensland, electricity prices averaged $97/MWh – the highest Q4 average on record and more than double the level of one year ago.

“That’s why the Morrison Government is focused on maintaining balance in our system by safeguarding the delivering of sufficient reliable generation alongside record-breaking levels of renewables.”