Proposed green hydrogen projects are rising across the globe with Australia and Europe emerging as dominant players in the landscape, but funding shortages mean half the projects are not expected to be operational until 2035, a new report from Rystad Energy shows.

The global pipeline of utility-scale green hydrogen developments, meaning projects with capacities greater than 1 megawatt, now exceeds 60 gigawatts, with 87 per cent of this capacity coming from gigawatt-scale plants.

“Despite the growing pipeline, we forecast less than half of this capacity (30 GW) will be operational by 2035, as developers will need to lower production costs,” said Rystad Energy’s head of renewables, Gero Farruggio. 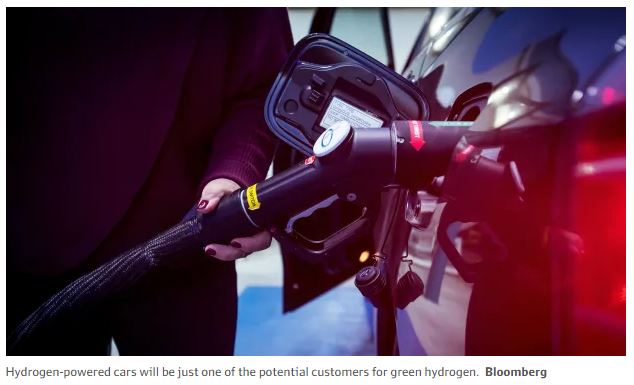 “Government support will be required to advance projects more quickly, particularly for those developments that will be powered by costlier offshore wind.”

The research shows Europe and Australia dominate the global pipeline, which includes 11 proposed electrolyser projects with a capacity of 1GW or more. Green hydrogen electrolyser projects are powered by renewable sources and it is hoped this fuel will replace oil and gas to reduce carbon emissions in long-haul transport.

Hydrogen is a key technology the federal government has backed in its road map to lower emissions.

But Mr Farruggio observed Europe is clearly already in the lead in terms of operational, utility-scale projects above 1 MW, with the majority of operating projects located in Germany.

Most electrolyser installations currently operating are in the pilot or R&D phases, with low capacities.

Meanwhile, Spanish utility Iberdrola has commenced the 18-month construction if its $500 million 317MW hybrid wind and solar farm near Port Augusta, as the company finalises its takeover of one of Australia’s largest renewable companies, Infigen Energy.

The South Australian project is expected to be completed by next year and will generate enough clean energy to power the equivalent of 180,000 Australian homes, the company said.

Once the friendly takeover of Infigen is approved approved, Iberdrola will become one of Australia’s largest renewable energy owner operators.

Iberdrola has signed major contracts for the Port Augusta project with Danish company Vestas for the supply and installation of 50 wind turbines with a 4.2 MW capacity, and Longi for nearly 250,000 solar PV panels.