Yet again we have the all too familiar quandary of a failing, thermal fleet of generation, coupled with high coal and gas prices as fossil fuels continue to be the primary price setter in most states. The latest release of the Australian Energy Market Operator (AEMO) “marginal loss factor” calculations resulted in some solar and wind farms suffering major losses in their calculated output, only fuelling further investment uncertainty. This is coupled with an already slower than expected roll-out of large-scale renewable energy projects. A relative perfect storm, which has only contributed to further rises in wholesale electricity prices this year.

The start of 2019 saw the warmest quarter on record, which lead to record high spot wholesale electricity prices in Victoria and South Australia.

Victoria and South Australia’s quarterly average spot wholesale electricity prices of $166/MWh and $163/MWh were their highest on record. The Network struggled at times to meet demand, culminating in AEMO activating Reliability and Emergency Reserve Trader (RERT) contracts on 24 and 25 January 2019 as a result of high coincident temperatures across both states increasing demand, a series of unplanned thermal unit outages and comparatively low wind output.

Remarkably, even with Queensland setting a new all-time maximum demand record of 10,044MW on 13 February 2019, the large generation portfolio suppressed prices significantly, making the Queensland spot market relatively flat. There were only a few instances where prices moved over a $100/MW. While New South Wales recorded their highest underlying energy price on record, there remained a lack of price volatility.

Cooler weather in Q2 brought about a decrease in price outcomes. April saw spot price drops across all regions compared to March due to the milder temperatures and lower demand. During May, price outcomes in New South Wales and Queensland remained consistent with the previous month, while Victoria and South Australia experienced slightly lower prices.

The announcement of an extended outage of unit 2 at AGL’s Loy Yang A power station in June raised further speculation about price and reliability implications for Victoria – particularly for the upcoming summer months. While spot prices showed little change since the outage commenced on 18 May 2019, the impact was felt as base future prices increased. June spot prices were higher in all mainland states compared to May, as was demand.

Bureau of Meteorology climate outlook for August to October suggests a drier than average three months is likely for large parts of Australia, with forecasts for warmer than average temperatures for much of Australia. This is expected to result in lower peak demand and potentially less chance of higher prices during this period. 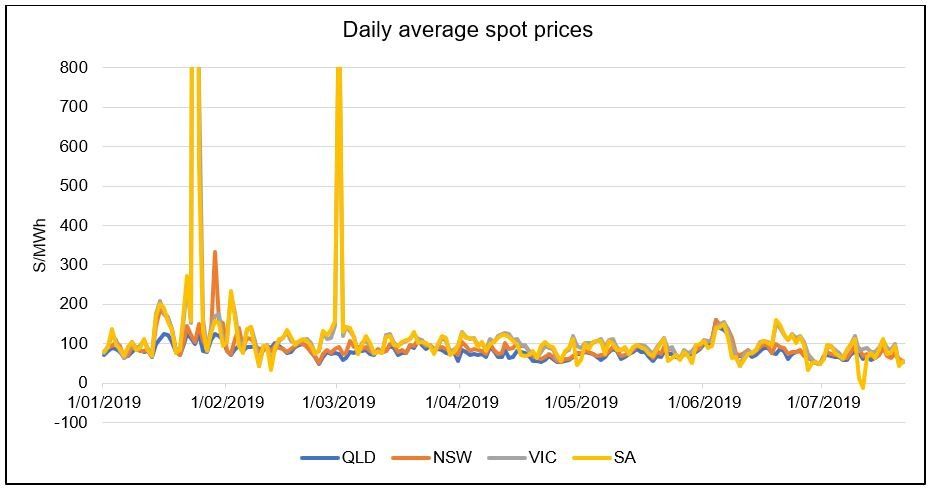