Background on the Drivers Maintaining High Prices in 2018 and 2019

The underlying drivers for the surge in NEM spot prices since 2015, and related impacts on contract and retail prices centre on reductions in available supply, with the retirement of some substantial, low marginal cost generation and the increased cost of gas. 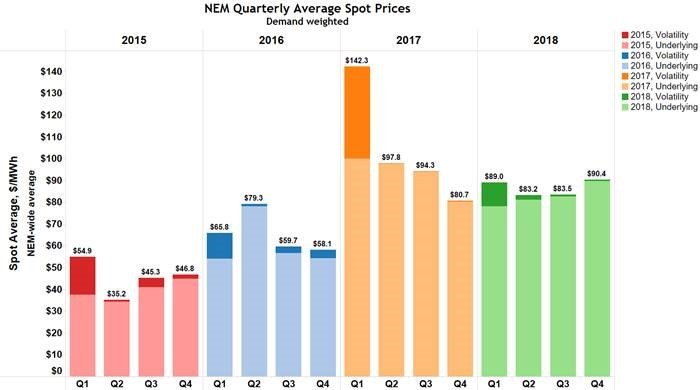 The reliability and availability of large coal-fired units in New South Wales and Victoria have and will continue to influence spot price outcomes in the short to medium term. A recent report by the Australia Institute highlighted the perilous state of the country’s thermal fleet, with Australia’s fossil fuel generators breaking down on 135 different occasions in 2018, with coal generators failing once in every three days.

Rising costs in coal have also played a role in elevating electricity prices; the benchmark thermal coal price rose to a 6 year high of $US120 ($164) a ton in the 2018 July quarter before falling to around $US101 per ton in the December quarter. Bloomberg New Energy Finance’s Second Half Australia Power Market Outlook stated that this unexpected jump in thermal coal prices “is that they have to charge more for their power”. More than 3,000MW of thermal coal capacity supplied to the national electricity market for $20-$40/MWh during most of 2016 now costs $40-$60/MWh.

The cost of gas has only added additional pressure on the market. While Queensland’s LNG export industry has brought significant investment and growth to the state, it has also caused disruptive price increases in the eastern Australian gas market. High gas demand for electricity generation following the closure of coal fired generators, regulatory restrictions on developing new gas supplies, and impediments to pipeline access for transporting gas, all further intensified market pressures. Even back in 2017 the ACCC was describing the gas market as “dysfunctional” so it’s concerning that years later the gas market has seen no sign of improvement

Despite improved conditions, the domestic gas market remained tight in 2018. Contract prices eased off the peaks of early 2017 but settled at $8–11 per gigajoule (GJ), which is 2 to 3 times above historical levels. January 2019 saw gas prices rise steadily and with gas generators filling demand caused by some coal baseload outages, this has been a driving factor to the uplift in market prices across all states.

According to the Australian Energy Market Operator (AEMO) Quarterly Energy Dynamics – Q4 2018, black coal-fired generation remained the dominant price-setter in the mainland NEM over 2018, although considering that hydro and gas generators only supply about 15-20% of the NEM’s energy, they were both prominent in setting the spot electricity price over the year. Conversely, solar, wind and brown coal generation which typically offer supply at much lower prices and generated over 30% of NEM energy in 2018 only rarely set the spot price.

AFR reported that sources point to the widespread drought and continuing high gas prices as two key factors contributing to the strengthening in the forward curve over the last six months. Snowy Hydro’s Lake Eucumbene is currently at 26.3 per cent capacity, which is only slightly higher than 2007-2009 lake levels range of 20-24 per cent.

One piece of good news has been the continued increase in renewable generation from new large scale solar and wind in the NEM, although this additional supply has unfortunately not led to lower underlying spot price outcomes due to the influence of higher priced gas, hydro, and black-coal generation in setting the marginal spot price.

Yet again 2018 and into 2019 saw bottom line generator profit driven by aggressive bidding practices of some of the big generators in the lead-up to the recent heat-wave and over much of summer – something that has been building over the last six months following AEMO’s warnings, the spike in futures prices and the scarcity of contracts available on the market.

Finally, we see a familiar landscape which has been another year of an energy policy vacuum leading to energy companies stating that chronic policy uncertainty is making it very hard to commit to big projects. Graham Bradley, EnergyAustralia chairman stated that “We desperately need policy stability and certainty before EnergyAustralia can commit to investing in new storage and generation developments that would replace Liddell”. Unfortunately, he is not alone in his thoughts on the lack of clear policy limiting future investment and prolonged indecision will result in delayed energy reform.